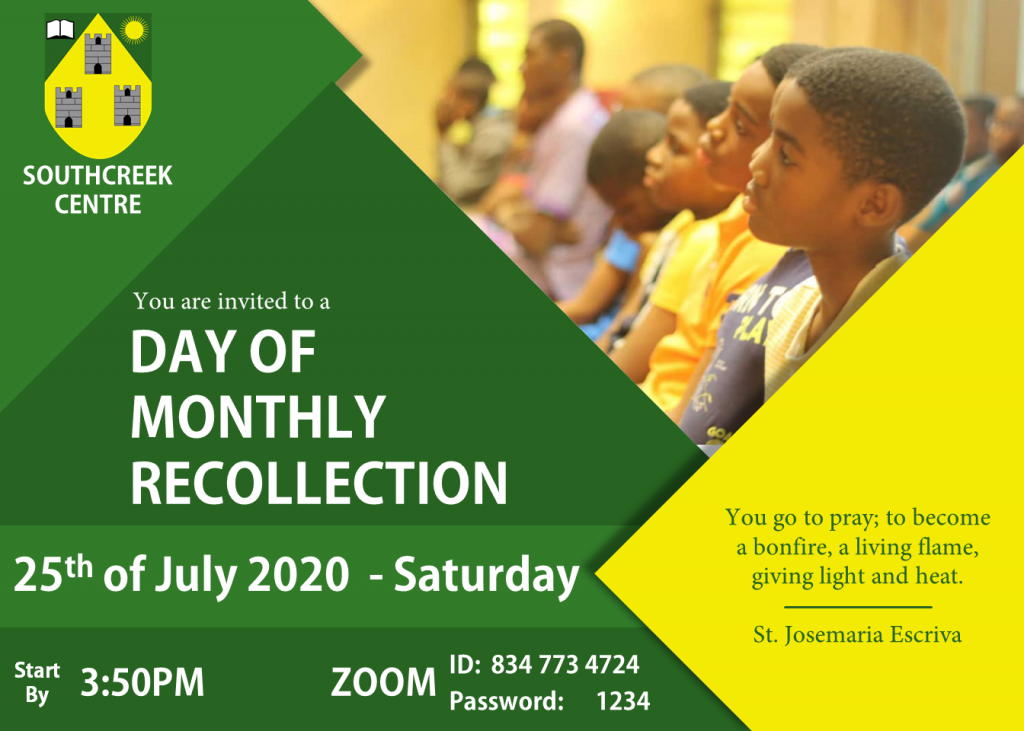 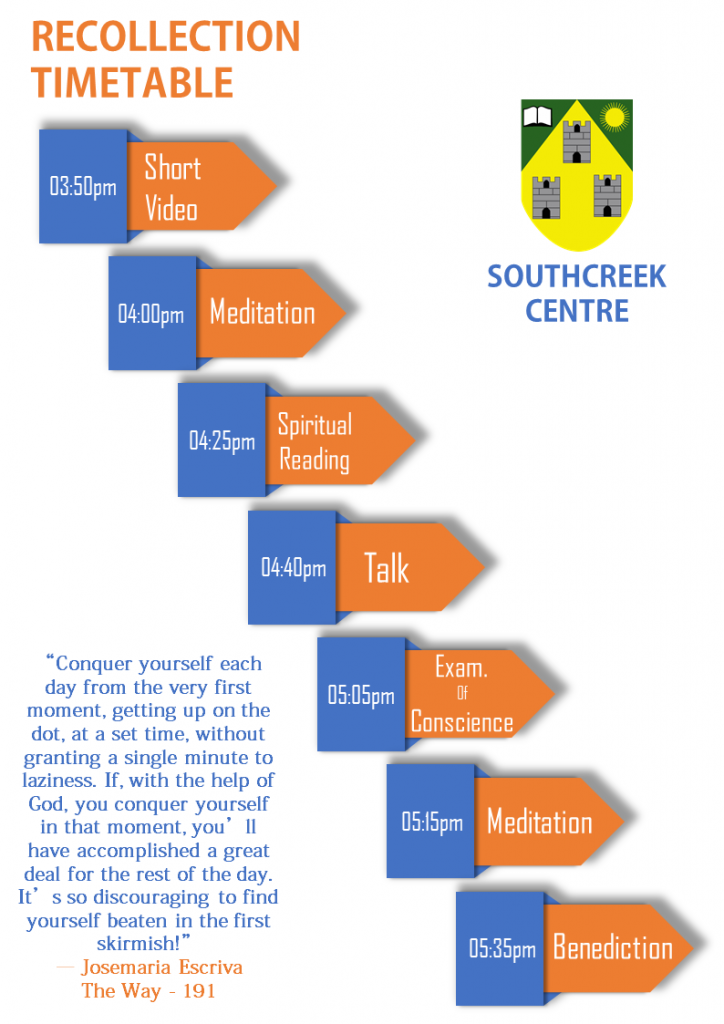 Dream and your dream will fall short: By Pedro Casciaro

I slept like a log. I don’t think anybody else did. When I awoke the next morning the Father and a few others had left the kiln and were wandering around the house. What had happened I wondered and what was going to happen? I went out and met the Father. His face was radiant with joy and peace. I understood even less than I had done the night before.

Paco told me that in those moments of doubt the Father had turned to the intercession of the Blessed Virgin, asking her for a clear and unmistakable sign – a rose – as a signal that he should push on forward. In short, he wanted something which would confirm him in his decision and which would comfort him in those moments of agonising doubt. That was something he had never done before, because he never sought anything out of the ordinary. It was an inspiration from God. And when he entered the ruined church near the kiln where we had slept, he saw the gleam of a gilded wooden rose.

That rose which had come from a reredos in the church, set on fire by the militia, was probably from behind the altar of Our Lady of the Rosary. It confirmed that he ought indeed to go on.

Years later the Father himself said: It is simply an insignificant little gilded wooden rose. I held it in my hands for the first time there, near the Catalan Pyrenees. It was a present from our Lady, through whom all good things come.

He was to speak very little about the rose in future, partly out of humility for he was the protagonist in that story of God’s grace, and partly because he was no friend of signs and wonders. He would very often say: Don’t forget my children, that for us the supernatural is to be found in ordinary things.

I acknowledge that I ought to deplore having slept so soundly that night. However, if I am to be sincere, I must admit I am glad. Whenever I have seen that something supernatural, something out of the ordinary, was at hand in our founder’s life, I have felt a particular kind of fear which has perturbed me greatly.

I give thanks to our Lady with all my heart for having that night confirmed the Father on the way he should take, and for having enabled him to overcome that bitter doubt; because, just as I have never seen the Father as stricken as on that night, neither have I ever seen him as elated as on the following morning.

Our brief stay in the house-cum-shrine of Pallerols ended as soon as the Father finished Mass on a makeshift table in a room next to the kiln. Although we were used to witnessing his piety when he celebrated the Holy Sacrifice, on that occasion, due to the extraordinary circumstances which had preceded it, it was even more emotional for all of us.

When Mass was over, Pere led us on foot four or five kilometres northwards, and we went deeper into the Rialp forest with its oaks, pines, and fir trees. He walked along very much on the watch in case he came across a possible catch for the daily ‘paella’. The paella (a fabulous rice dish, native to the Levant, made normally with chicken, seafood, and spices) was mostly made of wheat and squirrel meat. Pere left us in a cavern half-dug into the ground and covered over with logs and branches. It was perfectly camouflaged in the wooded surround. The other two from the group still to come, joined us a few hours later.

It was noticeable that there had been other groups of refugees in the cavern before us, because there was some straw left on the floor with which our predecessors had tried to combat the cold and the damp. Until we suffered its consequences, we did not know that those gentlemen had also left us another bequest of a rather less pleasant nature – a repulsive culture of lice!

To protect ourselves from the cold, Pere provided us with thin cotton blankets, one for every two people, which were hopelessly insufficient. We spent the nights shivering. Once, we lit a tiny fire inside the cabin at night; but it was not much of a solution, as we had to make sure no smoke escaped. So we ended up with a dense cloud of smoke forming inside and choking us.

Neither could we light fires or cook anything during the day for fear of being spotted from afar.

Sometimes availing himself of a donkey, Pere would bring us provisions; there was not very much of them but he charged us for these provisions as if we were in a grand hotel.

The Father christened that cavern, St Raphael’s Cabin, as a sign of his devotion to the archangels, whom he used to invoke as patrons of Opus Dei. To St Raphael he entrusted the apostolate with young people. Now, after all these years, I find it hard to believe that we were in the Rialp woods for only five days: it seemed to me more like seven or eight.

During our stay in the Cabin, the Father ministered to some priests in the area who were hiding in another cave higher up the mountain. They had been there for many months. Pere showed the Father the way to their hideout. Those good priests were very grateful for the chance to be able to talk to another priest who could tell them what had been happening over those months in Spain and in the world. In spite of everything, even their precarious situation, they had reason to thank God. Twenty per cent of the priests in the diocese of Urgel ended up dead. Of the 540 secular priests with parishes in 1936, 109 were assassinated during the war years. And to that figure must be added members of different religious orders.

Maybe we, too, could have hung out in the woods indefinitely without being discovered by civil guards or militiamen. At some point the Father said it was then that he truly understood the meaning of the wordemboscado (ambush, from ‘bosque’ – woods), which was a term frequently used in those times.

During those days the Father often insisted on our living a set timetable which did not leave us a minute to spare. He asked us to keep the Cabin clean, as well the area around it. He wanted us to put our hearts into keeping everything in apple-pie order. In fact he had us busy ourselves about things which I thought were completely unnecessary. After hearing Mass, which the Father celebrated in the mornings on an improvised altar in the middle of the woods among the chirping of hundreds of birds, he suggested that we should listen to a lecture given by one of us, Jose Maria Albareda for example, on a topic of cultural interest. The Father got other people to keep a diary and the Architecture students to draw. There was even a period for sports. I did everything he said; but I did not really comprehend the sense behind it.

Only with the passage of time did I come to understand the reason for acting in that way. The Father wanted to avoid the characteristic mentality which saps the will of people laid up in hiding. They dream of freedom, but end up clinging on to the comfort of their refuge because they do not want to make the effort needed to break out of their circumstances. In this way he had us occupied for days, keeping any hint of edginess, impatience, laziness, or discouragement at bay. It was yet another sign of his strength of character, wisdom, and serenity, when faced with the multifarious circumstances life presented him with.