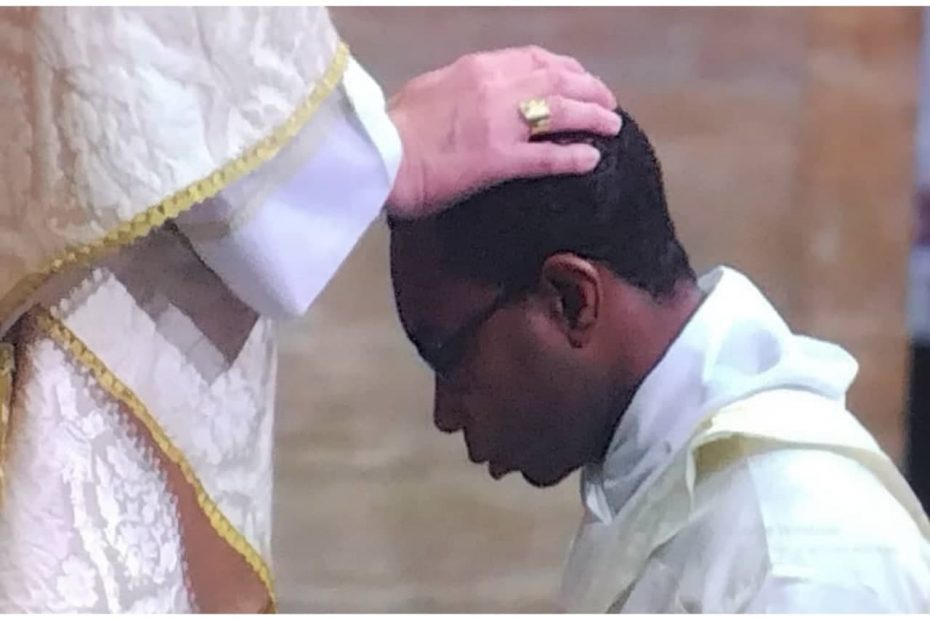 Archbishop Georg Gänswein, prefect of the Papal Household and private secretary of Benedict XVI, this morning ordained 27 priests of the Opus Dei prelature in the Basilica of Saint Eugene in Rome. The Prelate of Opus Dei, Monsignor Fernando Ocáriz, participated in the ceremony from the presbytery, and laid hands on the new priests after the consecrating bishop.

Due to the measures to contain the pandemic, the presence of only some relatives of the new priests and a small number of the faithful was permitted. The ordination was broadcast live through the link www.opusdei.org/live .

In the life of a priest, he said, moving away from Christ “does not mean progress but decline.” “Progress in faith, hope and love occurs only when we remain in Christ and are faithful to his Word. Whoever receives priestly consecration, has decided to remain in the Lord.”

“No one makes himself a priest. The priest is linked to the mandate to lead men and women to Christ, to encourage them to live in Him and in his Word.”

For Archbishop Gänswein, “the most beautiful expression to describe the role of a priest is ‘the man who blesses.’ He blesses from the Lord. And this requires putting his own life under the mystery of the Cross, with courage and humility.”

The priest “is not simply the representative of an institution who performs certain functions,” he added. He “does something that no man can carry out by himself; he does it in the name of Christ.” Hence “being a priest is not a function but a sacrament. God makes use of a poor man to be with all men and women and to work in their benefit.”

“It is sad when a priest or a bishop does not proclaim the Gospel forcefully and completely but offers his own opinions or ideas,” he said.

At the conclusion of the ceremony, Monsignor Fernando Ocáriz thanked Archbishop Gänswein for his presence, “which immediately leads us to that of the Holy Father Francis, whom we wish to support with our prayers.” And he addressed the families of the new priests: “I want to thank all of you, to thank you for having assisted God in making the vocation to the priesthood germinate in your children.” And our gratitude, he added, goes out “in a special way to Saint Josemaria, whose sons these new priests are, so that he may guide you from Heaven in your mission to serve all souls.”

Among the new priests is Fadi Sarraf, who is 49 years old. Born in Damascus (Syria), he came to Canada at the age of 17 to study engineering at McGill University in Montreal. He learned about Opus Dei in 1989, when a classmate invited him to visit Riverview Study Center, a student residence near the university campus. Sarraf says that besides the readiness to serve, another characteristic of the priest is being open to everyone: “The priest is there to help everyone,” he insists. “This is the example that Jesus gives us in the Gospel. Therefore the message of the priest, the Christian message, is not only for a few but for all men and women. A priest needs to welcome everyone and strive to ensure that anyone he comes in contact will can discover God’s love and wants to respond to that love.”

Another of the new priests is Mariano Almela, who comes from Vallecas, in Madrid. Vallecas, Mariano recalls, is where Blessed Alvaro del Portillo received a blow on the head when he was going to give catechism classes to children there back in the 1930s: “Thank God things have changed and many people in Vallecas are praying for me today. I realize how much I need those prayers, because being a priest is making oneself available to everyone to walk together towards God, who is the One who gives us happiness.” During his years in Italy, he has combined his theology studies at the Pontifical University of the Holy Cross, with assisting young people in Naples to grow in their faith and in their human virtues.

Several Africans were also ordained, including Casimir Kouassi, from Ivory Coast, who studied accounting and economics, and worked in a consulting company in his home country. Now he is concluding his studies in Sacred Sciences with a thesis on the Liturgy. He points to how young his continent is and says “I am excited to think that, as a priest, with the grace of God I will give hope and joy to many people in Africa and my own country.”

Another new priest from Africa is the Nigerian Obilor Ugwulali, whose name means “he calms the heart.” His grandfather died around the time he was born, so his parents told him that he had come into the world to calm their hearts. Originally from Afikpo, Obilor studied accounting at the Enugu campus of the University of Nigeria. He worked for several years before going to Pamplona (Spain) to study theology at the University of Navarra. He is currently completing his doctoral thesis on “The Contribution of Ratzinger/Benedict XVI to the Specific Norms of Christian Morality” at the Pontifical University of the Holy Cross. He wants to live by his name: calming the hearts of the people he will meet in his new ministry.

José I. Mir is from Palma de Mallorca (Spain). 57 years old, he is the senior in the group. After studying philosophy and theology at the University of Navarra, he worked for 20 years as director of two schools in Pamplona and San Sebastián. Ten years ago he moved to Romania to help begin the apostolic work of Opus Dei there. He also worked in several businesses and coordinated the construction of a student residence in Bucharest. “The priesthood,” he says, “is not a recognition of any achievement, but rather a unique opportunity to dedicate your entire life to serving God and others.”

The Mexican Josemaría Mayora asks for prayers “so that all priests know how to be mediators between God and mankind.” He was born in Mexico City, but since childhood lived in Guadalajara. Before moving to Rome to study theology at the Pontifical University of the Holy Cross, he studied Industrial Engineering at the Panamerican University. For 10 years he worked as a teacher and director at the Liceo Del Valle.

Vytautas Saladis, from Lithuania, is 30 years old and studied law at Vilnius University. He worked for several years in a law firm. Now he is finishing his degree in Canon Law in Rome. He is the first priest of Opus Dei from Lithuania, where the prelature began stable apostolic work in 1994.

Pablo Álvarez was born in Gran Canaria (Spain). He says that on May 23, the day after his priestly ordination, he will celebrate his birthday with the greatest possible gift: “Being able to celebrate Mass!” He is excited to be able to contribute to the happiness of many people through the sacraments, the preaching of the Word and spiritual accompaniment. He considers it a gift to have lived for some time in Lebanon: “My years in the Middle East, working with refugees from the Syrian war, opened my eyes to a wounded world that can only be healed when we put God at the center. Now I feel like someone who is about to jump out of a plane with a parachute. God has prepared for us a wonderful adventure filled with work for souls. We are relying on everyone’s prayer to be the holy priests that God wants us to be.”